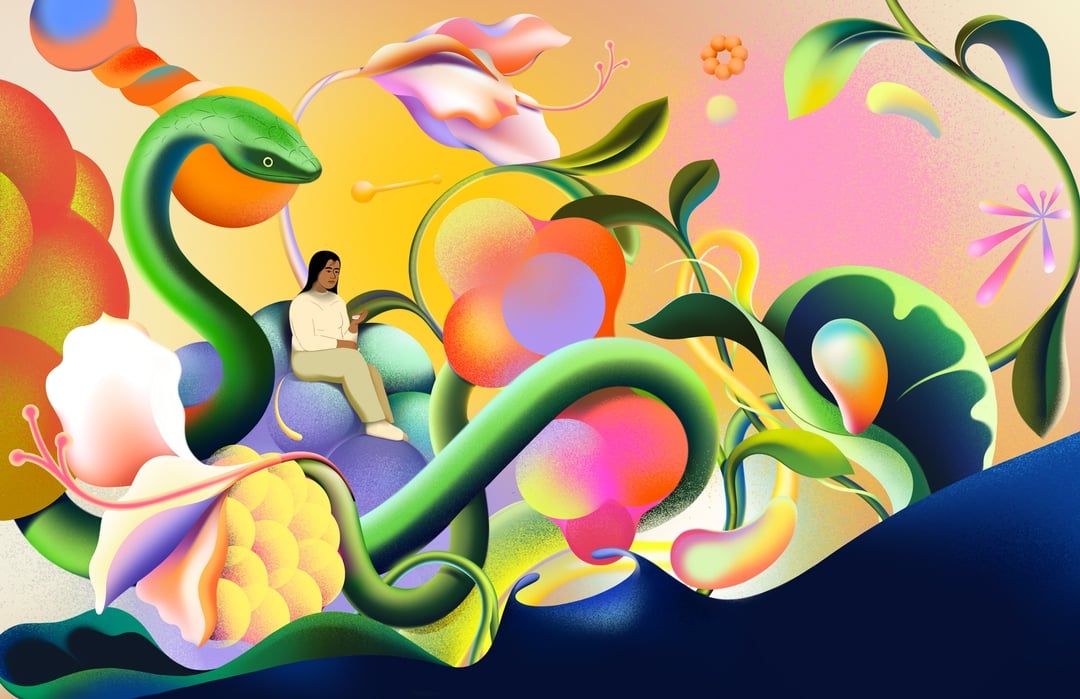 The face of biotech has no face at all.

It doesn’t have a spine. It doesn’t have complex organs. Hell, it sometimes doesn’t even have membrane-bound nuclei. Instead, designers have found their way into the lab. They’ve taken a look under fancy microscopes and been inspired by all those beautiful E. coli cultures blooming under gel lights. A new world once hidden has come into focus: Behold the biobrand.

In the past decade, biotech and synthetic biotech companies have proven there is a profit to be made from recent advances in biotechnology. When there is money to be made, shiny branding tends to follow, and so what has emerged is a new design trend that centers the biological and microscopic.

You’ve probably seen it already: Videos of furry cultures curling and expanding adorn adverts for probiotic pills. Renderings of giant coral reefs and butterflies embellish the backdrop of cosmetic brands. 3D animations of mycelium networks forming the shape of a sneaker enhance the website of a vegan leather company. What does this new visual trend, which idealizes the microbial, suggest about the growing value of organic life in the blossoming biotech market?

“I’ve always been doing PR for microbes,” said Christina Agapakis, Creative Director at Ginkgo Bioworks, a biotech startup out of Boston founded in 2009. The self-proclaimed “organism” company uses genetic engineering to produce bacteria and other genetically modified organisms for industrial applications across a range of different industries, such as plant-based food, pharmaceuticals, cosmetics, and agriculture.

“A lot of technology branding, a lot of that Silicon Valley aesthetic and culture, is about eliminating the body or the biological. It is very masculine and rationalist — there is a sort of rejection of the bodily form,” said Agapakis. “For me, biology smells. Biology is squishy. And so I’ve pushed for that in Ginkgo’s branding. That’s what I want the aesthetic to be.”

Unlike the lifeless and often vacuous aesthetics of their tech neighbors, biotech startups like Ginkgo are leaning hard into their connection to the organic via images of petri dishes, motley-colored bacteria cultures, and fungal networks, painting the natural world not as industry’s enemy, but as its fundamental coworker. In the process, biotechnology is increasingly appealing to investors and consumers seeking more sustainable products and materials, ones that aren’t antagonistic towards our planet’s organic realm.

“You don’t want to alienate people, and it’s very easy to do,” said Suzanne Lee, former creative director at Modern Meadow and founder of biotech company Biofabricate. Lee is among the first designers to introduce the language of design to biotech — she even coined the term “biocouture” in 2003.

For Lee, using storytelling and design is vital for bridging the knowledge gap between new biotechnologies and their potential for consumers or investors. “How do I explain what I’m working on, and what my company is working on, to my 12 year old niece, or the creative director of Balenciaga, or the design team at Mercedes Benz?” she said. For Modern Meadow’s bio fabricated material made “from nature not from animals,” Zoa™, Lee worked with creative agency Work-Order to craft a brand story that forefronts the material as a luxury leather alternative that’s just as good as “real” leather, but sustainable and low impact. Here, comparing the material to a product that’s already well-known and understood helps potential consumers understand what they’re potentially buying.

And the profit-motive for such storytelling has skyrocketed in recent years. Last year, Gingkgo Bioworks was valued at 17.5 billion dollars before it went public (now trading under the ticker “DNA”). Other biotech companies like BoltThreads and MYCOWorks, which have created leather alternatives from mycelium (fungi), have courted multinational brands like Adidas, Hermes, Porsche, Stella McCartney, and many more.

“The reason that this brand storytelling is happening now is because these companies have turned into real companies with products that they need to sell,” said Lee. “I spent the previous 10 years going to conferences on synthetic biology, where there was no one in the room with any kind of creative or aesthetic or storytelling ability. They just weren’t thinking about it in that way yet.”

For brands like Seed — a direct to consumer biotech brand that sells “symbiotics” (bacteria that’s good for your gut) — implementing biological forms into its identity is critical. It suggests that its products come from a place of serious research. For Seed, education also plays a central role in its storytelling: Social media and web campaigns are informative, with serene images of microbiome textures sitting alongside breezy facts about biology. This approach is of course carefully crafted, intended to convey a sense of reassuring scientific transparency to a consumer. While in the past, science has traditionally served as a means to deliver a product, with the biobrand, science is an integral part of the product. And so like all products, it needs to be sold. Which means the branding has to be compelling enough to keep people engaged with science that can often be extremely complicated.

The role of biobranding is ultimately to sell the potential of various organisms to a market that has grown sour towards plastics and animal products. “It’s a huge shift from animal-based brands,” said Alexandra Kisielewski, Partnerships Director at Biodesign Challenge, an organization that works to bring the new field of Biodesign to universities internationally. “They’re not going to show you the process behind an animal product because it’s messy and brutal. Biotech companies can show you what goes into making their products because, in their eyes, it’s a more innocent process. That being said, some might say, well, you’re still manipulating microbes and organisms — it’s just on a different scale.”

As well as placing microorganisms center stage, in the new biobrand aesthetic, you’ll also typically find scientific instruments, laboratories, people in white coats and goggles, ie. a fetishization of science that has long predated biotech in branding. But what’s notably different about the biobrand is the juxtaposition of lab with forest, or ocean, or meadow, i.e. the natural world. This imagery suggests that a brand’s scientific approach us aligned with, and even tied directly to, the well-being of the environment.

Almost every biotech company advertizes a kindly relationship to nature, whether they’re “fashioned by,” “partnering with,” or “inspired by” the organic realm. Lee said in the early days of branding synthetic biotech (the mid to late 2000s), it was all about green: “All the imagery people were using, like a leaf, or whatever it was, was rendered in a shade of green.” But now, biobranding has entered a far more sophisticated realm, reinventing what we know about sustainability and what it looks like. “We come with so many fixed, preconceived ideas about what is right or wrong, desirable or aesthetic. And I think that biology, and designing with biology, is going to be about challenging these ideas by literally upending them,” said Lee. “We want to do away with the aesthetics of petrochemicals.”

The logo mark of Ginkgo Bioworks depicts a leaf inside a gear — a telling emblem for the seemingly anti-romantic sensibilities of biotech and synthetic biotech industries. Through the wonder of microscopic worlds and making entire universes that were once invisible visible, the biobrand hopes to convince investors and people alike that the organic realm is not something alien and gross, it’s not the realm of germs, disease, and decay, but it’s actually the foundation of the production line of the future. The biobrand promises to deliver to us all the things we love despite the devastating changes to the world around us: With it, we can still have our sneakers, building materials, medicine, skin-care products, bacon and hamburgers, handbags, leather chairs, and more.

It’s hard not to be excited by the potential of these new products and the inventive new look of the biobrand. But even as we admire and embrace these changes, we must also recognize that capitalism itself is dependent on perpetual growth and resource consumption. Much in the same way that the biobrand aesthetic draws from biological and microbial forms, the brands it represents capitalize on the extraction and commodification of those same beings.

There should be no illusions here: To look at the Petri dish in a sterile laboratory, the fantastically rendered microbiomes, or the trendy mushroom sneakers, is to be reminded that branding’s entry into the microcosms of bacteria and fungi is not a celebration or recognition of these creatures as they are — fundamental players in our everyday life. Instead, their idealization is mostly a speculative, profit-driven proposition, a suggestion that these beings can not only become the products we know and love but they can also get us out of the mess we’ve made of things. So for the sake of the market, learn to love bacteria.