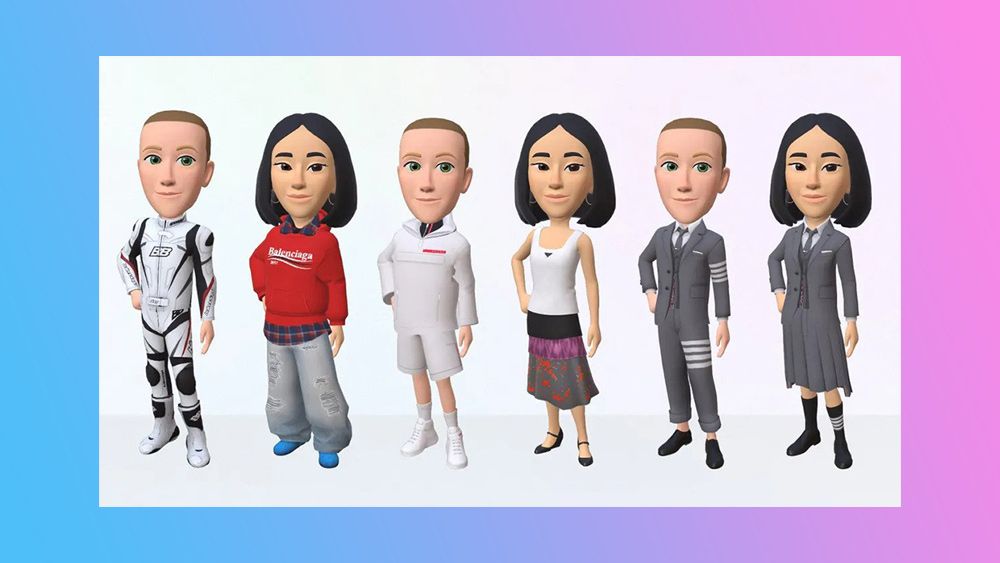 Tone-deaf, Meta? Never! The brand formerly known as Facebook has had its share of controversies over the years. Trying to distance itself from that was perhaps even partly why it changed its name. But it just doesn’t seem to have learned its lesson.

It’s put out a tweet announcing the launch of its Avatar Store for Facebook, Instagram and Messenger, and the first products on sale will be virtual outfits from Prada, Balenciaga and Thom Browne. Yes, it seems Meta’s contribution to helping people through the current cost of living crisis is to ensure that if you can no longer afford Prada in real life, at least you can dress up your avatar in designer threads in the metaverse. Suffice it to say, the internet has absolutely excoriated the idea (need to catch up on what’s happening with web3? See, our What is the metaverse? guide).

‘The Zuck’ shows off his new threads on the virtual runway (Image credit: Meta)

Meta’s tweet shows CEO Mark Zuckerberg and Instagram director of fashion partnerships Eva Chen kitted out in get-ups that include a hoodie, ripped jeans, what seems to be a motocross outfit and suits that look like school uniforms (yes, it seems a little ironic that ‘the Zuck’, so known for the eminent practicality and simplicity of his real-life wardrobe, would dress his avatar in a Thom Browne suit).

Meta says that Facebook, Instagram, and Messenger users will soon be able to purchase the digital clothing for their avatars using real money and that more brands will follow. However, the reveal was decidedly low-key, and Meta didn’t give any details about exactly when the avatar store will launch or how users will access it.

We can only assume that the virtual garb will cost less than the real thing. “Digital goods will be an important way to express yourself in the metaverse and a big driver of the creative economy,” Chen said on Instagram, where she also previewed another look featuring a cropped T-shirt and low-rise jeans in a “live avatar fashion show”.

But it seems that Meta hasn’t considered that amid rising inflation, users might not be in the mood for such frivolous profligacy. “Literally who asked for this? We’re struggling to pay for essentials right now,” one person replied to the company’s tweet about the launch.

“People can’t afford food, gas and clothes, but Facebook wants to sell you virtual clothes,” another person said. “If only Meta could give Zuckerberg some digital emotions,” another wag commented.

Aside from the questionable timing, others have levelled criticism at the tech and design concept itself. Meta’s trying to put itself at the forefront of Web3 with new virtual experiences, but a lot of people see its 3D avatars as something oh so year 2000, and a case of “the emperor wears NFTs.”

“Literally the lamest s**t ever. Everyone was bored of this 15 years ago with their Nintendo Mii,” one person said. “Why’s this remind me of the PC Monopoly game?” another person asked. “Love it how you’re trying to be like Bitmoji…unfortunately there’s nothing authentic about your avatars,” was another opinion.

Need a fresh fit for your avatar? We’re launching our Avatars Store on Facebook, Instagram and Messenger so you can buy digital clothes. Mark Zuckerberg and @evachen212 tried out new looks from @BALENCIAGA @Prada @ThomBrowne https://t.co/7SN0hdYz2D pic.twitter.com/Bp9zeK2ZNlJune 17, 2022

So far, Meta seems to have scored a bit of an own goal with this one (yes, another). The concept also seems to give the lie to one of the defences of designer prices, namely quality.

Sure, we all know the main purpose of designer clothes is as a status symbol, but with physical items, there’s always been the argument that a designer name is a guarantee of quality threads that will last more than a couple of washes. It’s hard to achieve that differentiation when the article’s poorly rendered on a 3D avatar. But let’s hold judgement and see how the launch goes – after all, you can even SMELL the metaverse now, apparently.

To get up to speed on more of what’s happening in the virtual world, make sure you see our guide to What are NFTs? and to how to make and sell an NFT.