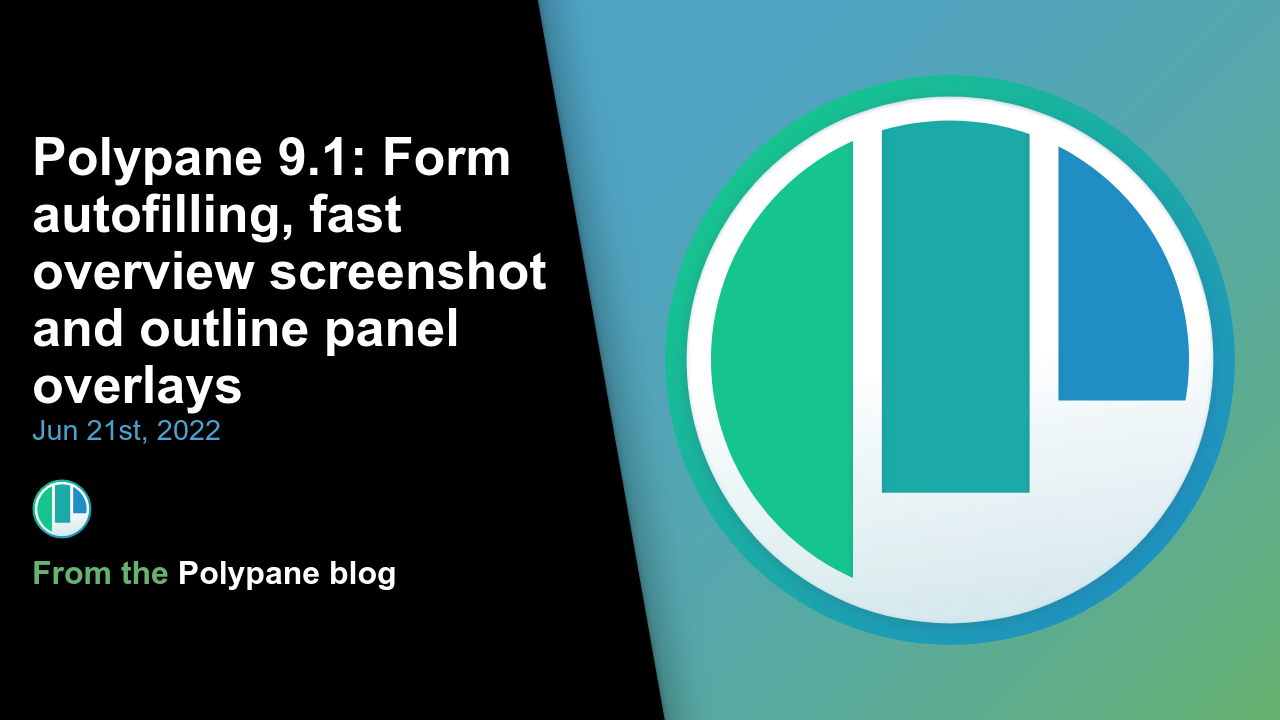 Polypane 9.1 comes with new features to quickly test forms, a much faster and robust overview screenshot feature, support for the INP web vital and a new way to show the heading and landmark structure inside the panes. We’ve also added new functionality to the screenshot editor, made it easier to customize your default tab settings and many other features. Read on for the full details.

When testing forms, the last thing you want to do is manually fill in all the values (even if they get synced across all panes). That’s why we added two new features to Polypane to help you quickly test an entire form, and to test with specific values for debugging, data handling and error messages.

The “Autofill Form” option appears whenever you right-click inside a form. With it, Polypane automatically fills in reasonable data for all the elements based on autofill attributes, input types, element names and placeholders.

And when you have form syncing turned on, that will be correctly synced across all panes as well. In addition to “Autofill Form” you can also quickly clear any form by selecting the “Clear Form” option.

But there’s more to just filling an entire form. You also want to test various different types of values, like ñôń-ßþáñðá®ð characters, buggy values and potential exploits. That’s what the new “Custom Value” option lets you do. It also gives you quick access to valid (test) credit card data, lorem ipsum and other handy snippets.

Right-click any form element and select values from a large list of categories to fill into the form. You can use this to test error handling, find security issues and verify data-integrity.

Though we have an extensive list of categories of custom values, do let us know if you’re missing something! We’re happy to add them.

We are thrilled with the response we’ve gotten to your new screenshot workflow in Polypane 9 and we’ve been improving and expanding on that foundation in this release.

Like our regular screenshots, the overview screenshot also happened in a background process. This was the cause of many small bugs related to page loads, rendering bugs and overall just meant it took quite a long time to create a screenshot.

We’ve added a new button to the stickers option in the screenshot editor that will let you add different numbers to the screenshot quickly. This is useful to explain ordering issues, or to refer to when adding the screenshot to a ticket or e-mail. Thanks to Eric for requesting this feature!

The overviews in the outline panel are great when building or testing a website because they quickly show if your site structure makes sense, but if you’re auditing a page often you’ll want to visualize issues more easily.

That’s why we now support overlays not just for the focus order, but also for all the other overviews. You can now turn on the overlay, create a full page screenshot and add it to your reports for a quick visual overview of the structure and any issues that Polypane found: 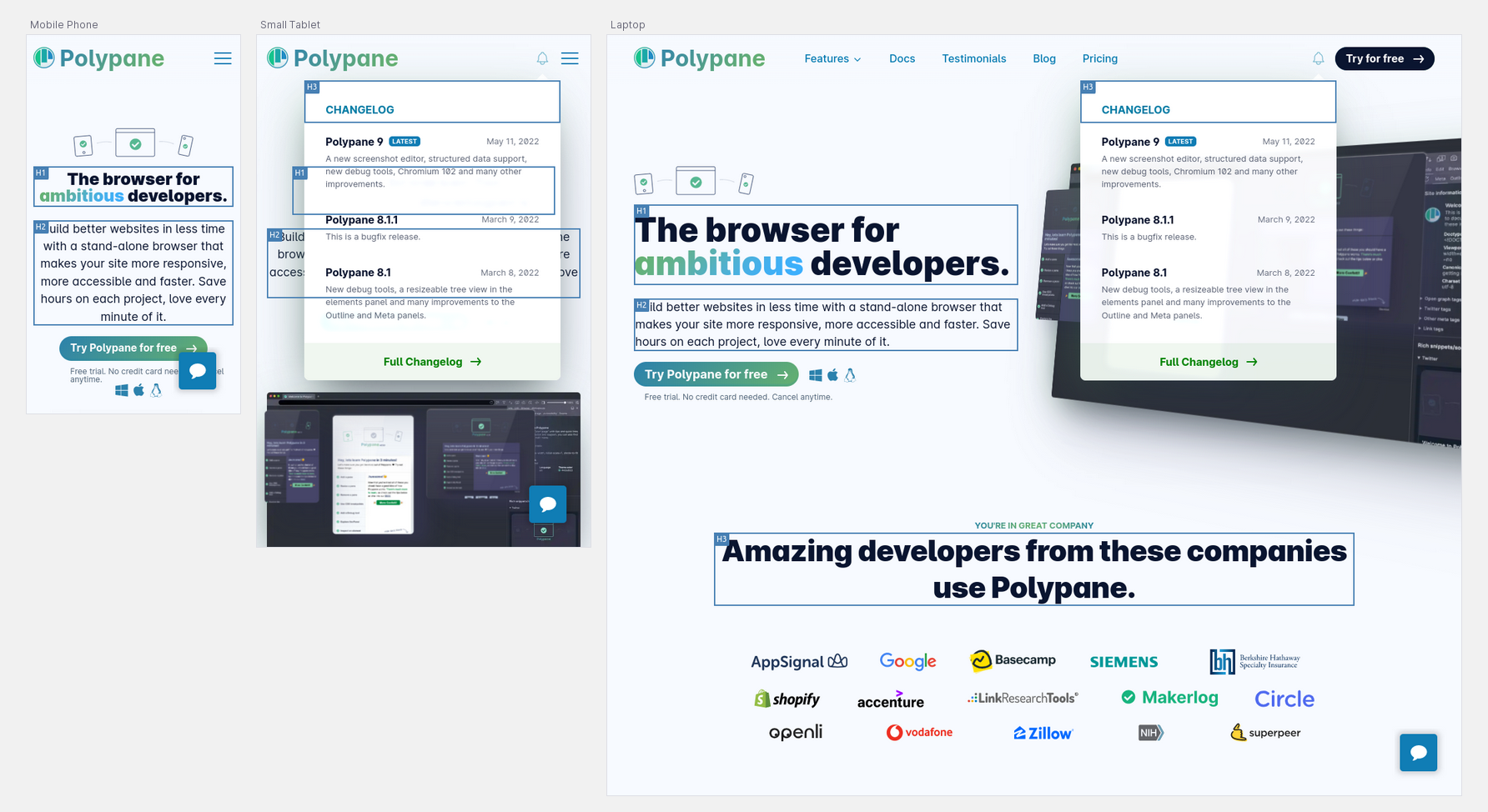 The new overlays are available for:

They will show the warnings already displayed in the outline panel right on the page so all the same information can be communicated outside of Polypane. Perfect for when you want to quickly see in-context whether an alt-text makes sense for an image, if a heading level matches its visual prominence and more.

The new “Interaction to Next Paint” web vital is similar to “First Input Delay”, except it continuously monitors your web page for how responsive it is to user input. The web vitals tooltip monitors this new value (it can change as you use the page) and also shows you how well the page scores globally using CrUX data. 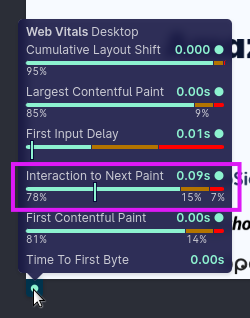 Polypane has had a few tricks that let you customize the new tab behavior, like remembering the last-chosen layout, or letting you set any tab as the default template for new tabs. We’re adding two new features that should make it a little easier to keep your favorite configurations around.

You can now right-click any tab and select “duplicate tab” (along with “close” and “new”) to make a copy of the current tab and focus it. This will copy over all the settings like panes, debug tools, layout and panel settings.

In previous versions of Polypane the pane options for the full layout were available by clicking a kebab menu in the header. In Polypane 9.1 they are now part of the header itself. 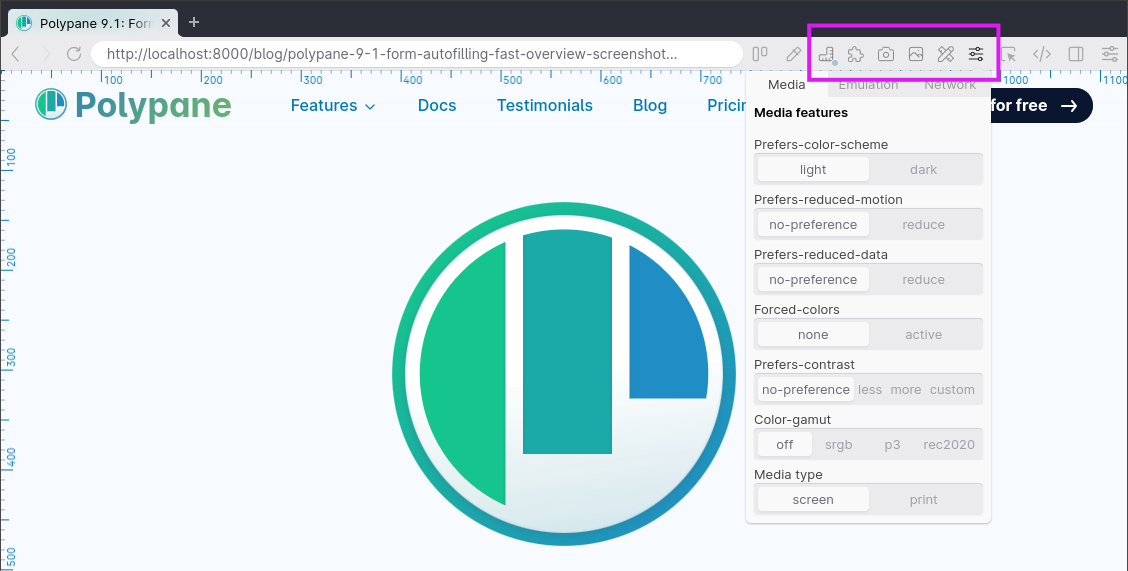 This means that things like emulation and debug tools are much easier to get to for full mode, but also that we’ve now enabled the reference image and rulers for the Full layout as well.

Beyond the new overlay features powered by the Outline panel, we’ve also improved various parts of the panel itself.

We show that in two ways: either it’s just the casing that’s different (for example because CSS is used to change the casing) or the entire content is different.

This is great for making sure that the accessible name and (visible) text content haven’t diverged, and that differences are intentional.

In previous versions of Polypane, hovering over an element in the Outline panel scrolled the first pane to that element, and all the other panes scrolled the same percentage. The element doesn’t have to be at the same position on each pane though so this didn’t do a great job of showing where the element was.

In Polypane 9.1, we now scroll each pane individually so that the highlighted element is visible in each pane. Scroll syncing is automatically picked up again at the next scroll.

For sites with a large set of presentational headings we showed them at their specified heading level but this wasn’t correct, and led to some strange hierarchies. Instead, we now show presentational headings as if they are one level lower and show them diminished compared to other headings to indicate they’re not part of the heading structure.

We’re always working on the Elements panel and incorporating the feedback we get from users into it. This time round, we made quite a significant change to the design and fixed some of the bugs that snuck in in Electron 9.

While I personally really liked the grey background, the devtools of all other browsers use a white background for the tree view and styling overview. To make it easier for people to switch over to Polypane, we’re now also using that color scheme. We might offer the grey as a configuration option in the future, depending on the feedback we get. So let us know if you like this change!

In addition to the new background, whenever you hover over an opening or closing tag in the tree view, we highlight the corresponding tag so you can quickly see which closing tag belongs to which opening tag even for deep nestings.

In the previous release we broke the display of both @font-face and @keyframe declarations. Those are now visible again, and we’ve also updated the display of them so they’re clearly separate from the ‘normal’ CSS styles. 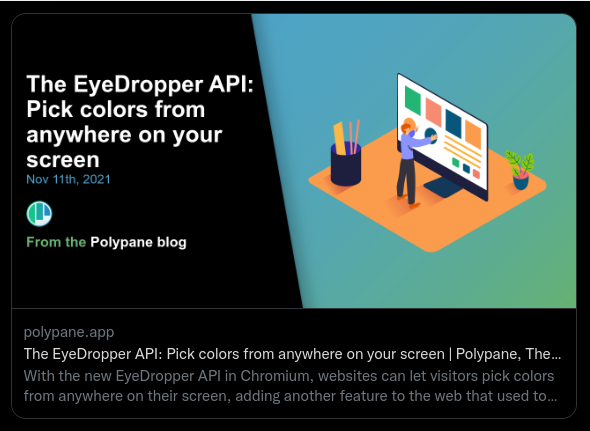 If you have duplicates in your robots.txt we now highlight that. They don’t do much harm, but you can delete one anyway:

Here are a bunch of other noteworthy updates.

With support for HWB landing in Chromium and other browsers, the Polypane color picker now supports the notation as well. 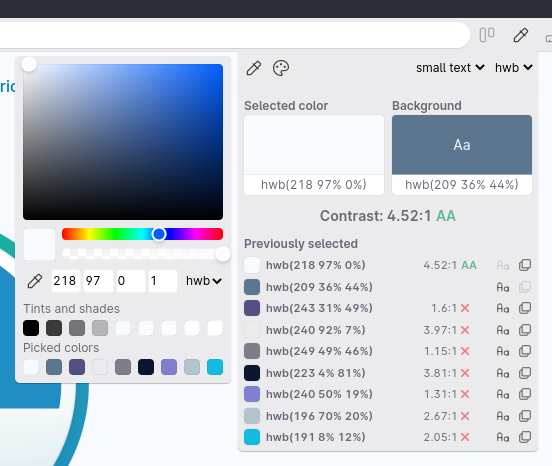 Icons in the panel

All the tabs in the panel now have an associated icon. This’ll make it easier for people to quickly find the right tab and makes it easier to tell them apart too:

The elements and console panels both already had auto-growing inputs, but now the storage panel will also increase the height of inputs if the content takes multiple lines. This will make it easier to edit e.g. json in localStorage.

Layout debugging shows ::before and ::after elements

Layout debugging draws a line around each element, but until now it didn’t outline pseudo elements. In Polypane 9 pseudo-elements are now outlined with dotted lines. 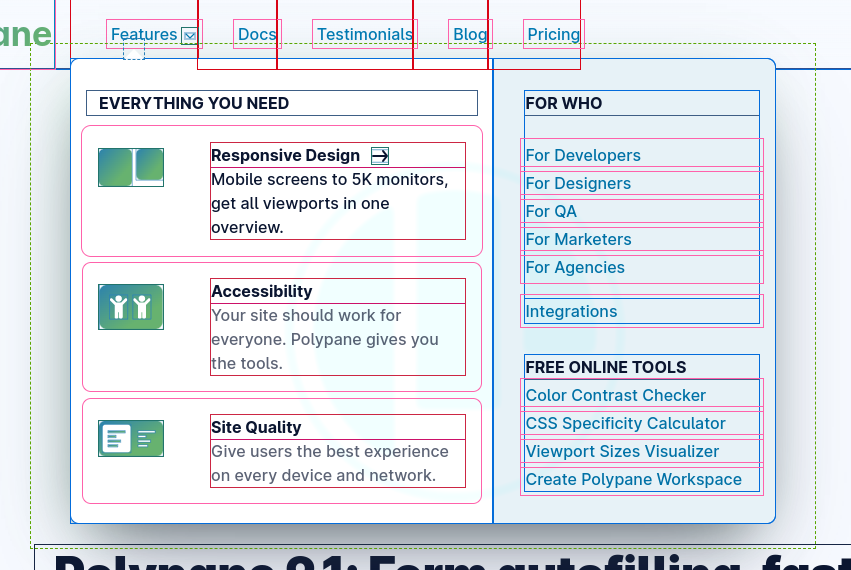 Pinch to zoom on MacOS for the horizontal and vertical layout no longer zooms in and out with a fixed cadence, but follows your pinch gesture instead so it becomes much easier to zoom to your preferred size with a quick pinch.

Chromium has been updated to 102.0.5005.63, and ships with a number of experimental features turned on by default, like support for the page transition api, container queries and :has(). Head over to our docs on Experimental Chromium Features for a full overview of the available APIs. If you’d like to see one activated, Let us know.

Polypane is available for Windows, Mac (universal dmg for both Intel and M1) and Linux (.deb or AppImage) in both 64 bit and ARM versions.

Polypane automatically updates on Mac, Windows and on Linux when using the AppImage. Otherwise, go to the download page to download the latest version!

Don’t have Polypane yet? There is a 14 day trial available. Try it for free.

Polypane 9.1 removes pane filters. They were rarely used and a source of confusion for users. The alternative is using different workspaces and switching between them.