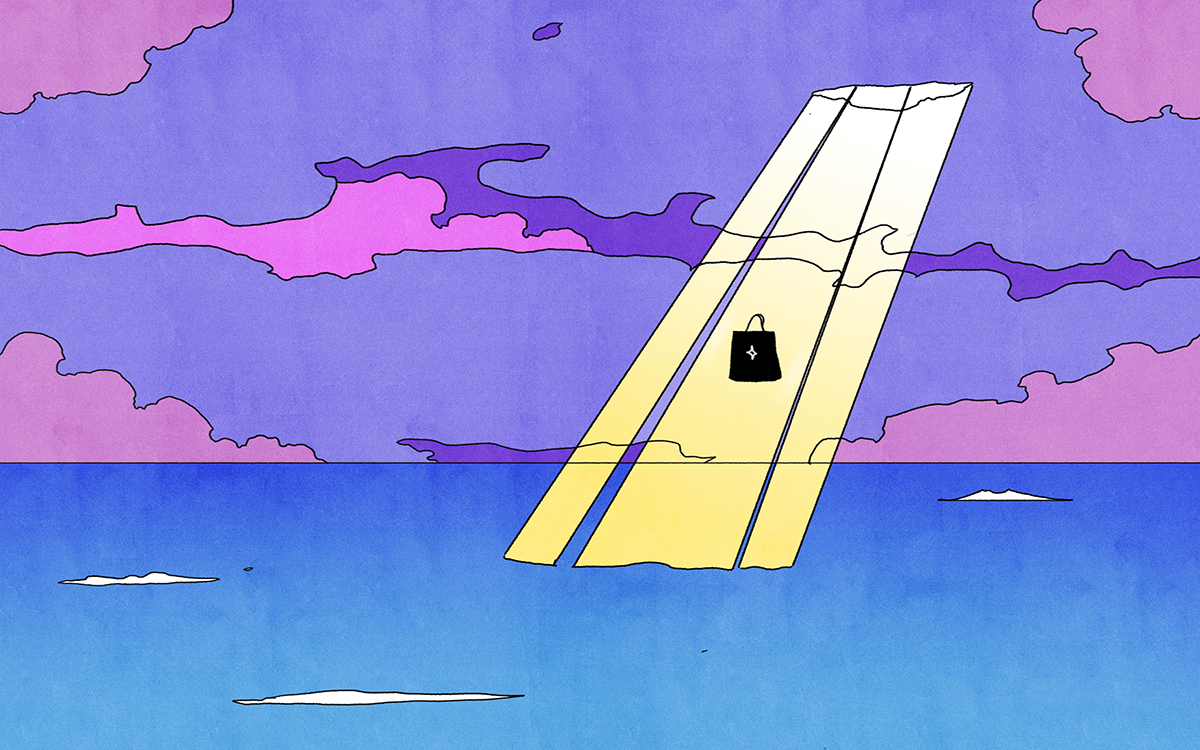 There’s a scene about halfway through Heaven’s Gate: The Cult of Cults that somehow felt more unbelievable than everything else that had come before. The 2020 three-part HBO documentary series recounts the story of Heaven’s Gate, a 1990s cult group that believed there was an earth-bound spaceship behind the Hale-Bopp comet, steered by extraterrestrial servants of God who were returning to help humanity ascend to heaven. The group, led by a former seminary student, Marshall Applewhite (who later went by the name “Do”), grew increasingly secluded as all its members began dressing the same and sporting identical androgynous haircuts. The group came to an end in March 1997, when they committed mass suicide in matching Nike tracksuits, believing that it was only through death that they’d reach “the next level”, a phrase they created to define returning to God. The Heaven’s Gate suicides are still the largest mass suicide on US soil.

But none of that was the surprising part. In the second episode, in a clip lasting no more than a minute, the filmmakers tell us that Heaven’s Gate was early to connect to the then-new World Wide Web and helped fund their activities through a studio called Higher Source, which offered graphic and web design services. The website for Higher Source, which is still accessible thanks to the Internet Archive, advertised services in website design, graphic design, audio/video, programming, and systems analysis. “Graphics can add the punch needed to attract the attention of even the most elusive Web surfer,” it stated. “Whether using stock or custom photography, cutting-edge computer graphics, or plain HTML text, Higher Source can go from ‘cool’ to ‘corporate’ like a chameleon.” To read through the language on Higher Source’s website is like reading the services offered by any top-notch branding studio.

I was surprised an extraterrestrial-worshiping group that ended in mass suicide also offered graphic design services, but maybe I shouldn’t have been. Cults are infamously image-obsessed, whether it’s Heaven’s Gate’s Star Trek-inspired iconography or Scientology’s use of celebrity spokespeople. They need to be savvy marketers to attract new followers. Cults, in this way, are just like brands, built around developing a coherent identity, complete with codes, imagery, and language that paint a clear worldview and ideology. (Nowhere is this more obvious than on social media, where the dominant action is to follow.) Nearly every cult uses the methods of branding to gain followers and every brand — whether they admit it or not — strives for a cult-like audience.

Cults, in this way, are just like brands, built around developing a coherent identity, complete with codes, imagery, and language that paint a clear worldview and ideology.

Cults are having a moment right now. Heaven’s Gate is just one in a recent run of documentaries on groups with questionable beliefs (I’ve devoured them all). There was The Vow and Seduced: Inside the NXIVM Cult, a pair of docu-series about the sex cult made famous after Smallville star Allison Mack was exposed as a high-ranking member; The Way Down, about a Christian-inspired weight loss group based in a wealthy Nashville suburb; and Wild Wild Country, about the Eastern-influenced religious group in Oregon; not to mention the ever-growing library of documentaries about Scientology.

Some of the most popular scripted television of the last few years have also had cult-tinged subplots, from The Prophet in Station Eleven to the cannibalistic group in Yellowjackets to Nicole Kidman’s eerily Goop-like wellness seminars in Nine Perfect Strangers to the mysterious Lumon Industries in Severance. I also found myself thinking of cults, again, while watching the handful of new television shows about controversial startup CEOs. In the second episode of Super Pumped, the recent Showtime series about the rise and fall of Uber, for example, the company’s lead investor rhetorically asks whether CEO Travis Kalanick is like David Koresh, the late leader of the Branch Davidians. Scenes in The Dropout, Hulu’s series on Elizabeth Holmes and Theranos, and WeCrashed, AppleTV+’s show about WeWork, feature scenes of employees filled with religious fervor, screaming and cheering for their charismatic founders, recalling moments in The Way Down or Wild Wild Country. While watching these shows, I’ve started to wonder: What makes something a cult and something else a brand?

The definition of “cult” is surprisingly porous and it’s only in the last century that it developed a negative connotation (most don’t end in mass suicide like Heaven’s Gate or the Jonestown massacre). In religious studies, a cult is defined by a group led by a charismatic leader and which usually triggers behavior-altering habits in followers. The general public tends to use the term for new-age religions or those with beliefs considered radical or extreme. Often unspoken, however, is that these groups are usually funded through selling a product or service, whether that’s tools and methods for self-help, books, and other content, or simply access to the club, complicating the lines between religion and company, self-help and grift. In popular culture, “cult” is used to describe anything with a small but intense fan base, as in a film that is a “cult classic” or a band that has a “cult following.” (“Cult” and “culture”, of course, share a root word, meaning “to grow”.) In other words, cults — in the widest sense of the word — are all around us. QAnon has been described as a cult. So have Instagram influencers, Harry Styles fans, certain productivity hacks, and CrossFit.

In her 2021 book, Cultish: The Language of Fanaticism, Amanda Montell wrote that followers are drawn to cults not because of “some freaky mind-bending wizardry that happens on a remote commune” but rather something much more banal: language. “From the crafty redefinition of existing words (and the invention of new ones) to powerful euphemisms, secret codes, renamings, buzzwords, chants and mantras, ‘speaking in tongues,’ forced silence, even hashtags, language is the key means by which all degrees of cult-like influence occur,” she wrote. “Exploitative spiritual gurus know this, but so do pyramid schemers, politicians, CEOs of start-ups, online conspiracy theorists, workout instructors, even social media influencers.” The through-line here — from the mysterious Lumon organization in Severance to QAnon adherents, the daily Peloton devotees to the Heaven’s Gate web designers — is that the difference between a cult and brand is much less than we think. All of us, every day, buy into similar language, both verbal and visual, that indoctrinates us into particular belief systems, whether that’s the promise of spiritual enlightenment or the type of clothes to buy before we go to a particular gym.

These distinctions have always been blurry but it wasn’t until the late 70s and 80s that the overlap of cult and brand became apparent, primarily through the rise of multi-level marketing programs, in many ways the original social networks. Though these programs — companies like Tupperware, Anyway, and Mary Kay — had been around for decades, it was during this era that many started to incorporate spiritual, self-empowerment language, mostly around ideas of being your own boss and unlocking social and spiritual freedoms. Incidentally, this is the same model Scientology, which was founded in the 50s by science fiction writer L. Ron Hubbard, uses: selling increasingly expensive courses and “technologies.” NXIVM, the sex-cult founded by Keith Raniere, was a multi-level marketing program that also sold “technologies” promising to help followers become better leaders and professionals; these so-called “Executive Success Programs” went horribly wrong; culminating in branding their logo inside women’s legs.

All of us, every day, buy into similar language, both verbal and visual, that indoctrinates us into particular belief systems, whether that’s the promise of spiritual enlightenment or the type of clothes to buy before we go to a particular gym.

By the 90s and early 2000s, it wasn’t multi-level marketing programs that felt the most like cults. Instead, it was fitness brands and gyms such as SoulCycle and CrossFit, which gained popularity using similar self-empowerment language. “It’s a space to come as you are and celebrate who you are,” reads a current headline on SoulCycle’s website, “to emerge feeling stronger and inspired.” One could easily swap this marketing language with a headline from Scientology’s website — “You can rise!” — and no one would know the difference. Today, it’s not uncommon to see modern brands of all types using similar language, employing aspirational campaigns, featuring heavy usage of self-empowerment language, glossy imagery, and clean logos to sell us not just a product but an entire lifestyle. Goop, perhaps, is the epitome of this trend, but you can see it in everything from shaving companies to sneakers to new foods.

The key to building a strong brand is coining new terms and phrases, and rebranding old ideas as something novel. In her book, Montell notes that many cults do this too. For a cult, the act of inventing new words and phrases creates an internal language and sense of community, a subtle way to begin separating members from families and friends who aren’t also part of the group. The members of Heaven’s Gate referred to their bodies as “vehicles”, for example, and Scientology created new terms like “going clear” to mean taking control of your own thoughts. Brands, too, are experts at phrase coinage, whether it’s the lengthy list of acronyms CrossFit followers use or Warby Parker’s human names for frames. You know a brand has transcended its product when a name becomes a verb (think about ‘googling’ or ‘ubering’). No one, perhaps, is better at this than Apple, from calling its tech support the “Genius Bar” to renaming high-resolution screen technology “Liquid Retina.” (In fact, Steve Jobs’ famous keynotes could be read as a religious gathering — a charismatic leader presiding over his flock. Of course one of the most popular Apple blogs is called… Cult of Mac.)

Especially in this social media age, these differences between guru and salesperson, influencer and prophet, brand builder and cult leader fade away. As social media reshaped how brands communicate with audiences, dissolving the boundaries between company and companion, it’s no surprise that cult-like groups have also flourished on these platforms. Brands increasingly refer to their customers as a “community” and then encourage that community to find new members, through sharing their content with their own followers. People align their identities with those of the brands they follow, tagging them in posts and blurring the lines between advertising and evangelizing. When I wrote about changing trends in retail design, I inadvertently used religious language: “These stores are less brazen shopping experiences and more like immersive sponsored content: works of total branding, temples unto themselves, a capitalist Gesamtkunstwerk.”

Popularity in cults tends to grow in moments of cultural turbulence. In times of uncertainty, we look for groups of like-minded people to remind us we’ll be okay. You don’t need me to tell you that we are again living in an era of rapid change that might explain the rise in interest in cults, whether it’s all the recent documentaries, the widespread belief in conspiracies, or even the religious-like devotion felt towards particular brands. It makes sense that as the world feels more precarious than it has in decades, when coupled with Americans’ continual decrease in aligning with organized religion, that the new groups to fill the void are not cults in the traditional sense but brands. (As a former cult member told Montell: “The next Crusades will be not religious but consumerist.”) Indeed, the religious scholar Reza Aslan said that the oldest joke about cults is that “cult + time = religion”, meaning if you give a cult enough time, it’ll eventually be accepted as a religion. Perhaps it’s time to update the equation: cult + time = brand.