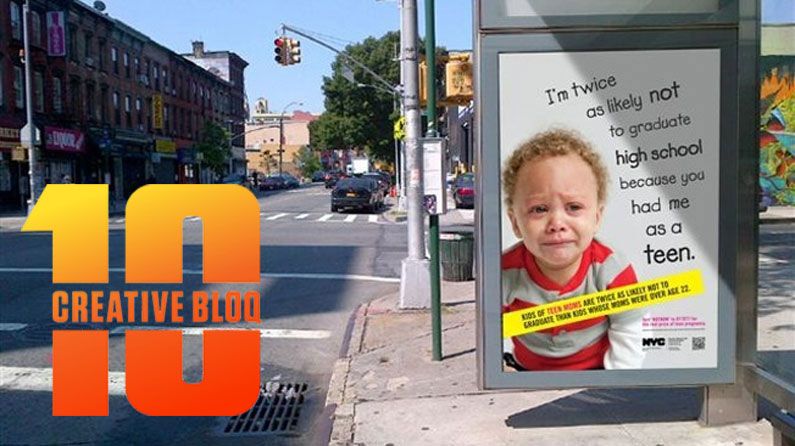 Creative Bloq is now ten years old! To celebrate a decade of design, we’re looking back at past articles. These ads missed the mark at the time, but has the past nine years done them any favours? We can’t believe some of these ever made it out of the ideas room.

We’ve seen some incredible examples of TV commercials and print ads this year – with many award-winning campaigns being some of the most creative we’ve ever seen. However, some have been less than popular, signalling an eruption of complaints. Take a look at some of the most controversial ads of the year.

Adam&EveDDB (opens in new tab) took Marmite’s famous ‘love it or hate it’ tag line a step further in this latest campaign, satirising animal cruelty appeals by “raising awareness” of woefully neglected Marmite jars across Britain. Many were upset that the company had made light of a very serious subject and that it “trivialises the work of animal welfare charities”.

Click the image to watch the commercial (opens in new tab)

If we’re honest, we can’t quite believe that this commercial for Hyundai (opens in new tab) was ever approved. The advert for the Hyundai iX35 depicts a man who looks as if to be attempting suicide, but doesn’t succeed because the iX35′s emissions are, apparently, mainly comprised of water. It received mass complaints and was eventually pulled.

This recent Red Bull (opens in new tab) ad caused controversy in the U.K. for its potentially offensive subject matter. Depicting a man loading Red Bull – the energy drink that gives you wings – onto the Titanic, he is then stopped by the captain who argues, “Wings? Why on Earth would you need wings on a ship? Stupidest thing I’ve ever heard.”

This advert caused outrage due to its blackface make-up

This campaign for Dunkin’ Donuts (opens in new tab) in Thailand caused uproar for its blackface make-up, which is reminiscent of 19th/20th century stereotypes for black people that are offensive symbols of a racist era. CEO Nadim Salhani replied, “We’re not allowed to use black to promote our doughnuts? I don’t get it. What’s the big fuss? What if the product was white and I painted someone white, would that be racist?”

Was this Indian ad in bad taste?

This series of ads for Ford (opens in new tab) in India came just days after the country approved a tougher new law to punish sex crimes. Showcasing women tied up in the back of their cars the ads received a mass of complaints. Created by individuals within JWT India (opens in new tab), a unit of the world’s biggest advertising group WPP (opens in new tab), it’s been reported that they did not go through the normal review and oversight process.

HRA (opens in new tab)’s new Teen Pregnancy Prevention campaign showcases hard-hitting facts about the money and time costs of parenting, and the negative consequences of having a child before you are ready. It has provoked negative reactions from every quarter – the right, the left, mayoral candidates and even health advocates.

Argued as one of ‘the most racist commercials in history’ by Syracuse Professor Boyce Watkins, this Mountain Dew (opens in new tab) advert was created in collaboration with Odd Future (opens in new tab)’s Tyler the Creator. The minute-long spot depicts a police officer goading a severely wounded white woman into picking out her attacker from a lineup of four black men (portrayed by other members of Odd Future) and a goat (voiced by Tyler himself).

A controversial and shocking ad campaign to raise awareness of anorexia

Here, Brazilian modeling agency Star Models created an eating disorder awareness campaign featuring your typical fashion sketch on the left with the models photoshopped to look like a human version of the same on the right. Shocking and controversial it may be but we think for the right reasons.

This latest commercial from Kmart (opens in new tab) is called ‘Show Your Joe’. It was unveiled just days ago and features six men wearing Joe Boxer and thrusting their midsections to the tune of ‘Jingle Bells’. Some have relished its silliness whilst others have been highly offended. What do you make of it?

In Washington DC, the Metro got into deep water with this ad for implying that all women are interested in is talking about shoes. Great way to alienate 50 per cent of your customers, guys.